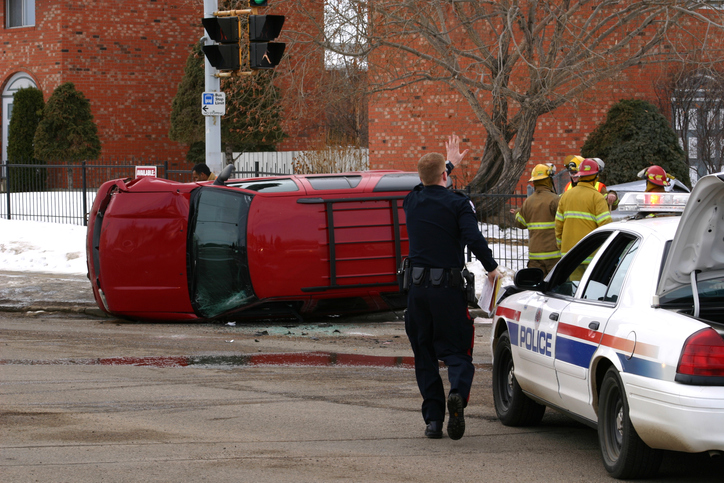 A dramatic rollover accident in Colorado Springs that involved a four-door truck flipping over a retaining wall resulted in damage to five vehicles, but, amazingly, no injuries.

The accident happened on a late July afternoon when a woman lost control of the large maroon truck she was operating. The vehicle flipped over a concrete wall and took out a metal highway fence at the intersection of Academy and Union streets near Stetson Hills shopping center. The truck landed on two parked vehicles. The force of the crash slammed the fence into another two cars.

The driver faces a citation for careless driving, according to 11 News.

The lack of injuries in this type of crash is fortunate and surprising. A rollover accident that hits four other vehicles usually results in multiple severe injuries and emergency ambulance rides to the hospital.

Rollovers are among the types of car accidents most likely to give rise to serious injuries and fatalities, but any type of car accident has the potential to be deadly.

Here are some examples of the most common crashes and their causes.

Head-on collisions occur when the front ends of two vehicles travelling in opposite directions crash into each other (often violently due to the force involved). These types of accidents can result in traumatic brain injuries, spinal cord damage, broken bones, internal bleeding/organ damage, and other very serious if not fatal injuries. Inadequate surveillance is a frequent contributing factor in head-on collisions and car accidents in general. This means a driver failed to look, or looked but didn't see, oncoming traffic or other critical events. About 20% of all reportable car accidents involve a driver who failed to observe what was going on around them.

Turning or crossing at an intersection is one of the most common situations leading to car accidents in the U.S. About 40% of all accidents happen at a crossroads. They occur when a driver doesn't adequately survey the area, is distracted, makes a false assumption about other drivers' actions, turns with an obstructed view, runs a red light, or is speeding.

This type of accident is often caused by distracted driving and following too closely (tailgating). Distracted driving is any type of behavior that takes your attention away from the road while you are operating a motor vehicle. Common distractions include texting, changing music, looking up directions, eating, drinking, self-grooming, passengers, and reaching for objects within the vehicle.

You don't hear about them as often, but a lot of crashes are single-vehicle accidents. These often include a driver losing control of their vehicle and hitting another object and leaving the roadway, as well as crashes with pedestrians, bicyclists, and animals. Nationwide, there were more than 12,000 fatal single-vehicle accidents in 2019.

The cause of a single-vehicle crash isn't always known, but when there is an explanation it often involves speeding or manufacturer defects. Speeding is a factor in nearly 20% of car, truck, and motorcycle accidents. The category includes driving over the speed limit as well as driving too fast for road or weather conditions.

If a manufacturer defect causes an accident it is usually a failure in the tires, wheel alignment, brake system, steering, or engine mechanics.

People who aren't in motor vehicles are too often the victims in car accidents. In 2019, more than 6,200 pedestrians and about 850 bicyclists died in the U.S. due to car accidents. This type of accident often involves drunk or impaired drivers as well as those attempting illegal maneuvers. The most frequent contributing factor is when a car, truck, or motorcycle fails to yield the right of way or blows off traffic signals and signage.

If you were injured or a loved one died in a car accident caused by someone else in the greater Colorado Springs region, it is important that you understand your legal rights and options. Medical bills, lost wages, and other accident-related expenses (damages) can add up fast after a bad crash, and if someone else is to blame, you deserve compensation for your losses.

At The Longo Firm, LLC, we help accident victims recover maximum compensation for their injuries and other losses. We have the knowledge, experience, and resources to calculate the true cost of your accident, gather and preserve evidence, build a strong case, deal with the insurance company, and fight for every dollar you deserve.

We offer legal representation to accident victims on contingency. That means it costs you nothing upfront to hire us and our legal fee is a percentage of any monetary compensation we recover on your behalf, whether that's through a settlement or a court verdict. In other words, if we don't win then you pay no legal fees.

Contact us today to schedule a free consultation with an experienced car accident lawyer.